You are here: Home / News / Uncategorized / 50 years for John at Balcas! 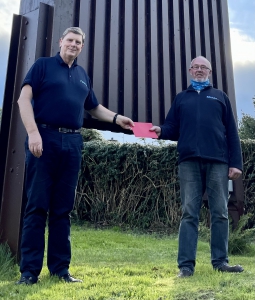 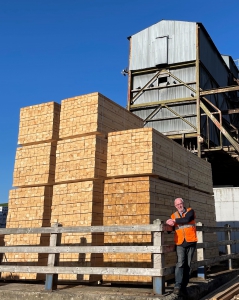 It was a momentous day in Balcas as we made a presentation to John Virtue on the occasion of his 50th anniversary!

Since the 18th October 1971, it’s safe to say that John has seen some changes in Balcas, least not – well more than a fifty fold increase in production volumes.

In those early years when Ballycassidy Sawmills was just ten years old, every single piece of timber had to manually fed into the machinery and each finished piece of timber stacked by hand. In fact the Bandmill (pictured) where John first started is used now only for oversized timber, running just a day or two per week.

The Planer mill processing plant that John was the Supervisor for many years now has an automated infeed and stacker. During his time John has seen timber graded by eye, and then mechanically stress graded, to now seeing its graded by x-rays. However, one thing that hasn’t changed is the camaraderie…

John says; “When I started with Ballycassidy Sawmills as it was then, there was just 11 men and 2 women working here in just one building and the Bandmill. So I’ve seen a lot of change which has kept the work fresh and I’ve also met a lot of good friends along the way, definitely happy times.”

This site uses cookies. By continuing to browse the site, you are agreeing to our use of cookies.